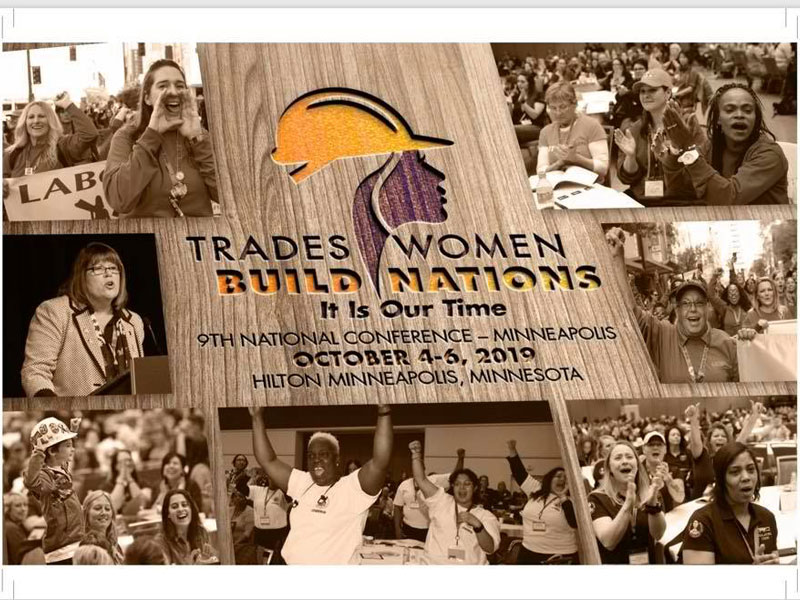 The 9thannual Trades Women Build Nations Conference will be hosted in Minneapolis on Oct. 4-6, 2019, and the members of the Local 49 Women’s Group are gearing up for the event by taking experiences from their trip last year to plan for this year’s event.

The Trades Women Build Nations Conference is for women of all ages and skill levels who either currently work or aspire to work in the construction trades. Whether they are on the pre-apprentice level or seasoned journeypersons, the conference provides a unique opportunity to learn from and connect with tradeswomen from around the country and world.

Kim and Britney Bray attended the conference for the first time. “The conference provided me with the opportunity to network and hear stories from many other women in the building trades,” Britney Bray said. “The presentations and classes covered a variety of topics and issues that women in the trades face. A highlight for me was learning about current and historical efforts relating to unions and labor movements.”

“I was able to share my experiences with other women, and I now know how important it is for me to step up and become a mentor and a leader,” Kim Bray added.

The conference offered more than 35 workshops and sessions and was focused on the needs of tradeswomen and the unique challenges they face. The workshops and sessions were facilitated by tradeswomen and featured union leaders, apprenticeship coordinators, contractors, and elected officials. They covered various topics such as recruitment and retention, leadership development, policy, and politics.

This was Wendy Stuhr’s first time at the conference and she said it was an eye-opening and rewarding opportunity.

something we can bring here through additional education and opportunities,” Stuhr said.

Debra DeBruzzi and Connie Smallman, who previously attended the conference in 2017, shared their experiences attending the conference for the second time.

“The workshops still focused on finding ways to promote tradeswomen through building knowledge and gave ideas to develop leadership skills in our jobs in the union,” Smallman said.

“”I enjoyed meeting so many intelligent, hard working and supportive women and men who were encouraging each and every participant to be the best they can be at whatever point they are in their careers,” Smallman added.

DeBruzzi noted that the difference between the first year she attended the conference and the one she attended in the fall was the connections she made with other members in IUOE locals.

“This time I was able to meet so many women from our own trade and so part of the focus was meeting our other sisters out there, and Local 302 really welcomed us and facilitated all of that,” DeBruzzi said. “I think it’s really important to network and hear what other women in our trade are doing.”

Leaders from IUOE Local 302 organized several activities prior to and during the conference. One  activitity was a high school career fair where all IUOE members were invited to assist at.

“Watching the students operate the equipment gave me a stronger sense of pride in my union, because I got to share the knowledge that I’ve obtained with each and every person,” Akeethia Brown said. “I know that day we all inspired those students, especially the young women, because by seeing us they now know that they can excel in construction.”

“All IUOE members were invited to attend a networking fishing trip prior to the conference, and it was such a great way to meet the women from the other (IUOE) locals,” Stuhr said. “We want to show that same hospitality when the conference is here.”

While the conference was focused on women in the trades, there were many male attendees as well. They included business agents from different trades, business owners and other leaders in the union and business community.

“We want to encourage all members to attend the conference this year, including our fellow brothers, we’re stronger when we’re unified,” Stuhr said.

The Local 49 Women’s Group also wants to encourage other female members to get involved in the group. They are not only focusing on organizing events for the upcoming conference, but are getting involved in other opportunities that will empower female members and their success in the industry.

If you are interested in joining the group and learning more information please e-mail WomenOfLocal49@gmail.com

The agenda for the 2019 Trades Women Build Nations Conference has yet to be release, but more information can be found at www.nabtu.org/twbn

The Local 49 Women’s Group wanted to extend a special thank you to Marg Newgendt, Lacey Hall and Tami St. Paul of IUOE Local 302.