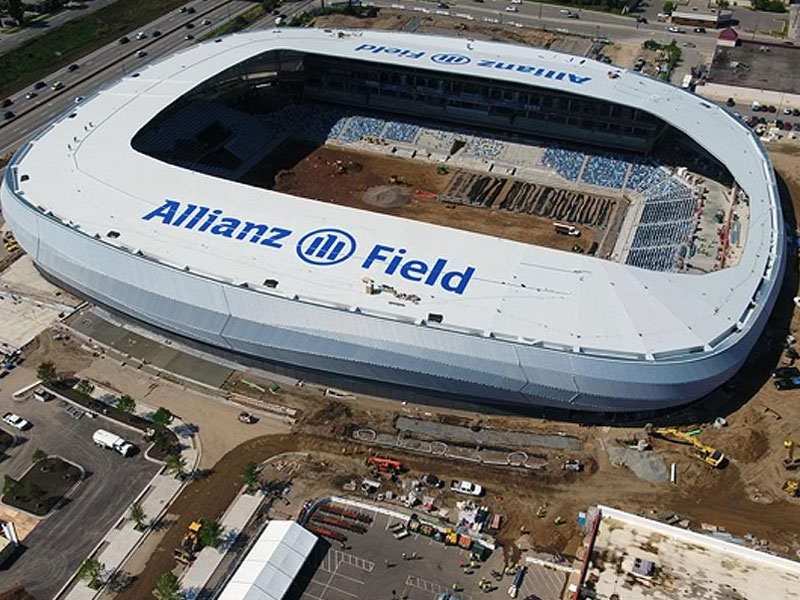 Local 49 members have made enormous contributions in building every major stadium in Minnesota, and the new Allianz Field is no exception.

More than 50 Local 49 members and several of Local 49 signatory contractors were instrumental in building the new home of the Minnesota United FC, which is celebrating its grand opening today.

Justin Degnan, Superintendent for Bolander, said the preparation and pre-planning by Mortenson, the general contractor, coordinated the success for the rest of the project.

“The planning and the flow of the job was excellent,” Degnan said. “The preparation of the work that was going to take place was huge and Mortenson did a great job.”

Bolander completed the demolition and site development for the project. They had a dozen operators on the job that hauled out 200,000 tons of contaminated soil and hauled in 70,000 cubic yards of clean material and 60,000 yards of sand for back fill.

Wayne Iverson, a 21-year member, worked on the project for Mortenson for nearly its entirety as a crane operator

and heavy equipment operator. It was his first time being a part of a project of this size from start to finish.

“It was pretty amazing to be a part of the beginning with the foundations being poured to loading materials at the very end,” Iverson said.

Iverson has worked on many of the stadiums in the Twin Cities and said what made Allianz Field so unique to construct was the shape of the stadium.

“The round tubing to make the shape of the stadium was partially fabricated in two different states and then shipped to the project site, so that was unique to be a part of and it’s something I’ve never seen done before,” he said.

Cal Ziegler, a 43-year Local 49 member who works for Danny’s Construction Company, also noted the shape of the stadium made the project unique.

“Having all of those pieces come together and making sure they fit was a challenge, but everything came together perfectly,” Ziegler said.

Ziegler worked on the project for eight months as a crane operator and was a part of setting the structural steel for all of Allianz Field.

Another unique feature of Allianz field is the irrigation system.  There are 192 mature trees planted around the stadium that use the storm water system for irrigation and are among three acres of new public green space and planting that have been added to that area.

Dustin Finn, a 21-year Local 49 member who works for Pete’s Sewer and Water as a loader operator, was a part of working on the intricate irrigation system.

“There was quite a lot of revisions to the plans, but we got it done on time and it was fun to be a part of,” he added.

The $250 million, 19, 400 seated project spanned over 20 months and went through two tough winters. “We worked

through some cold days, but we still managed to finish ahead of schedule, which is always the goal. I was proud to be a part of that,” Ziegler said.

Norm Everson, the Operations Manager for Bolander, also noted the weather being a challenge.

“We had some foundation drilling components, and that was the toughest part of the project was drilling that time of year. We also had to mix water for the grout, and that doesn’t go well when it’s below zero,” Everson said.

Despite the challenges and tight deadlines, Allianz Field was completed on time and more importantly safely with no major incidents and accidents during construction.

“Our number one accomplishment is safety. Stadiums come and go, but the safety of our workers and having no accidents was an accomplishment for all our workers,” Everson said. “I’m very proud of our Superintendent, our Foreman and all our employees who were consistently on the job.”

“All the other trades and contractors working together to make sure the project was completed went great,” Iverson said. “It was also done safely; the job began and was completed without any incidents.”

Allianz Field is yet another landmark project that Local 49 members can take pride knowing that they built another stadium that thousands of people will enjoy for years to come.

“It’s always great to be a part of another landmark in Minnesota. It’s too bad now that everybody’s got a new complex, we’re running out of sports orientated facilities to be a part of,” Ziegler said with a laugh.

“If I go to the game with one of my kids, I get to say I was a part of building this and so I do feel a sense of accomplishment,” Everson said.