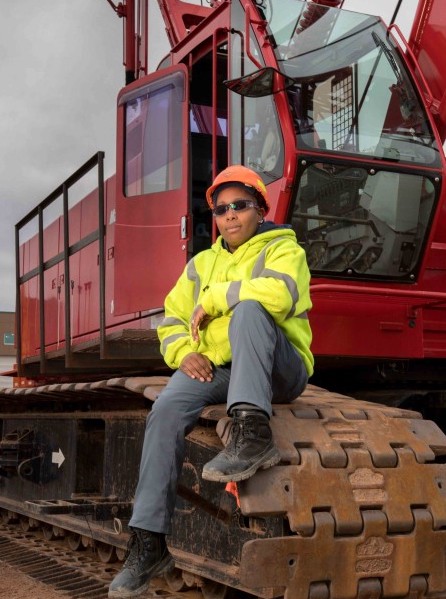 “This is the greatest job in the world, and I wouldn’t trade it for anything.”

NaFeeSha King has worn many hats throughout her career in various industries but says that getting to put on a hard hat every day has been the most rewarding.

“I always wanted to do construction, but when I was younger, I always thought it was a man’s world type of thing, so I instead went into the medical field and became a certified medical assistant,” NaFeeSha said.

However, one day at work, she was discussing her dream of always wanting to work in the construction industry and was encouraged to go for it.

“My coworker was talking about the construction industry and how she heard of more females entering the field, so we did some research, and that’s when I found the Local 49 Apprenticeship program. I filled out the application, and it wasn’t too long before I got a call from Lunda Construction, and a week later, I started,” she said.

NaFeeSha’s first project was working on the Southwest Lightrail project and has worked on six of the stations on the project.

“It was exciting to see how projects get started. It was like entering a whole new world and learning a foreign language all at the same time. I was trying to be the biggest sponge ever,” she said.

During her time with Lunda Construction, she was also in the apprenticeship program and taking classes at the Local 49 Training Center.

Everyone was so encouraging at the Training Center, and they helped me learn at my own pace. I like to say this is the best roller coaster ride I’ve ever been on. When you first get in equipment, you’re nervous, but when you start to get the hang of it and actually begin operating, it gives you such an adrenaline rush,” NaFeeSha said.

Throughout her time at the Training Center, she said that her goal is to take more crane courses to eventually become a crane operator.

“Operating a crane is the biggest toy out there, so that’s definitely what I want to do. I like the fact that the crane operator kind of runs the job. It’s stressful but exciting at the same,” she said.

While NaFeeSha has only been an apprentice/member for two years, she says this has been the most rewarding career she has ever had.

“I have worked in the medical industry, been a teacher, been a bus driver…I have done so many things, and I finally feel like this job is what I was meant to do,” she said.

She also encourages other women to enter the construction industry and not to be afraid.

“Have a strong and confident attitude, and don’t let anyone tell you that you can’t do something. I had my struggles when I first started out, but I just kept asking questions and showing them that I care, and I’m in this to learn as much as I can,” NaFeeSha said.

“Show them that effort and that you’re a team player, and you’ll go far. This isn’t a man’s world anymore, so don’t be afraid,” she added.