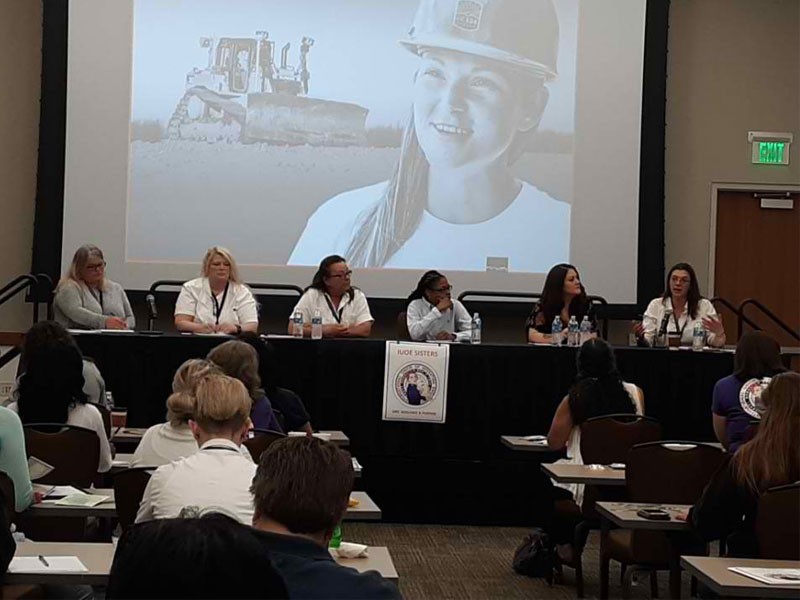 Local 49 members and co-founders of the Local 49 Women’s Group, Wendy Stuhr and Connie Smallman, were invited by the International Union of Operating Engineers (IUOE) for the first Sisters Leadership Conference hosted last month at the IUOE’s new training facility in Crosby, Texas.

The goal of the conference is to encourage networking, build relationships with fellow IUOE members, and to use the training and resources available as stepping stones to implement continued IUOE tradeswomen organizing, advocacy, and awareness within their locals.

Stuhr and Smallman were invited to the conference to share with other IUOE members, leadership, and staff how they established the first Women’s Group in the IUOE.

“We were a part of the networking and committees workshop where Connie and I presented on how we worked with union leadership to establish the Women’s Group and give other IUOE members tools to start their own Women’s Group in their locals,” Stuhr said.

“We shared the importance of not being afraid to reach out to their elected officers and executive board members to gain support with creating a Women’s Group,” Smallman said. “We talked about how to create a platform for networking and building the sisterhood community.”

Stuhr and Smallman stressed how important it is for members who are wanting to create a women’s group within their local to get involved in their union.

“Sit on committees, go to events that are offered by your union, and attend other leadership conferences. Even being in touch with your sisters in the other trades can give you different ideas on how to start a women’s group,” Stuhr said.

“We’ve also been participating in community, political, and union events and it’s important to be active in your union and your community,” Stuhr added.

Stuhr and Smallman also attended other workshops and seminars for additional resources and support to bring back to Local 49’s Women’s Group.

“Vicki O’Leary, the NABTU tradeswomen committee chair, led one of the workshops on incorporating behaviors that focus on the cornerstones of change: safety, communication, diversity, equity, and solidarity,” Smallman said.

Stuhr and Smallman said another exciting part of the conference was when they met IUOE General President James T. Callahan.

“Every time we spoke with General President Callahan throughout the conference, he was genuinely sincere and wanted to educate himself on how to help us. He agreed that change needs to happen, and he supports us,” Smallman said.

Stuhr also noted that attending the conference and hearing the experiences of other IUOE members inspired her to keep driving the movement of women entering the trades forward.

“Attending the conference confirmed the need for more women’s groups and the awareness that’s needed out there to even the playing field,” Stuhr said. “It gave us a sense of empowerment to continue looking at other avenues for support, to find solutions, and to work in the union. We gained positive feedback to take back to the Local 49 Women’s Group, and I look forward to the continued collaboration.”

While this is the first IUOE Sisters Leadership Conference, the goal is to make the conference an annual event for more female operators to attend.

If you are interested in joining or learning more information, please e-mail the Local 49 Women’s Group at local49women@gmail.com.