Local 49 Members Working Together for 20 Years 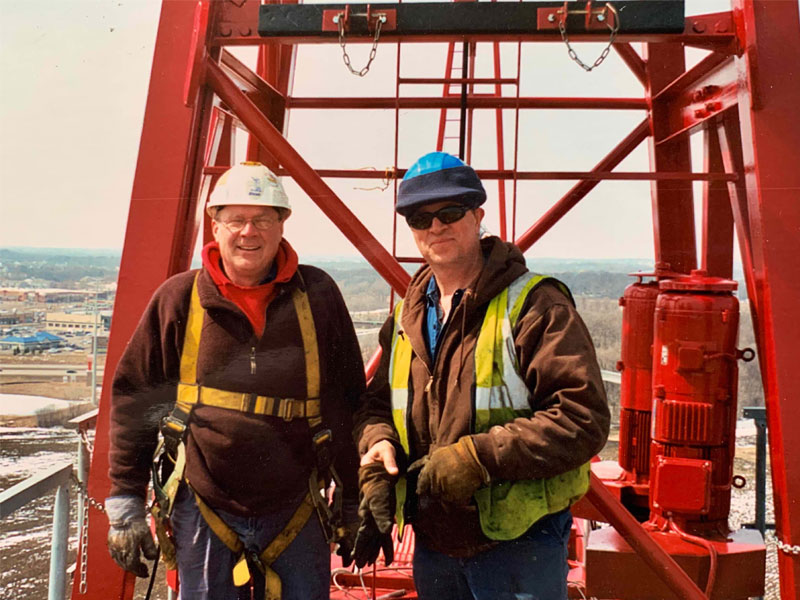 Local 49 Members Working Together for 20 Years

Dan Sapp and Victor (Vic) Yamry have worked together at Advanced Equipment as Crane Technicians for 20 years, and on top of that, Sapp works with his son Adam as well.

Victor Yamry has been a Local 49 member for 34 years and got his start in the industry when his uncle retired from Advanced Equipment. “He was the equipment manager and the one that got me started in the union,” he said.

Yamry is now the senior tower crane technician where he does all the prep work for the cranes before they are loaded out to go to a job site. Once the cranes are at the job site, he is responsible for erecting the cranes properly.

“I calibrate the tower crane and certify them, and I erect them, I also do all the service repairs for them on the job site…I’ve probably been on more than 400 job sites,” Yamry said.

Over his 34 years as a crane technician, Yamry has worked on many notable projects.

“My most memorable one was the St. Paul Cathedral because it was such a high media job. We re-did the roof on the cathedral. Target Field was another one because we had three tower cranes on that project and you’re constantly on the move and responding fast because if a tower crane is broken down, the whole job shuts down,” Yamry said.

Yamry says he takes great pride in being a tower crane technician because it’s such a specialized and challenging position.

“Being a tower crane technician is something that you learn from others. It’s not something you can take a class in. There’s also respect that’s needed when you’re working in that height and around the tower crane,” he said.

Yamry says he also is enjoying training the next generation of tower crane technicians.

“It’s been great training the second and third generation, and right now I spend a lot of my time training and passing on the knowledge…we have a great young crew coming up,” Yamry said.

“I could have retired, but I’m staying around to work with the younger generation.”

Dan Sapp has been a Local 49 member for 20 years and has worked for Advanced Equipment his entire career. He started out working on their semi-trailers and gradually moved into the hoist technician position.

“We do personnel hoists, or people know them as skips, and we go out and erect them as well as do all the maintenance on them,” Sapp said. “We also do the maintenance and dismantle the tower crane when the job is complete.”

Like Yamry, Sapp’s job requires him to be up in the air if something is broken down with the tower crane. “It’s something you do eventually get used to and the busier you are, the less you notice how high you are,” Sapp said. “For ten years, I worked on tower cranes directly with Vic (Yamry), and I was his back up, so I learned a lot from him.”

Sappe has not only worked on notable projects around the Twin Cities; he has also worked all over the country.

“Right now, I do a lot of work in Iowa, Denver and I’ve even worked in San Francisco,” he said. “In the past, I’ve worked at U.S. Bank Stadium, where we took two of our skips, at Target Field, where we had three tower cranes and the Mall of America.”

“But the best view I ever had was working at the Guthrie Theatre in Minneapolis, and we were working in the dark, but it was around Christmas time so I could see all of Minneapolis lit up with Christmas lights,” Sapp added.

Sapp says the challenging part of the job isn’t always the height, but the change in schedules.

“A lot of your schedule is dependent on the weather. If it’s raining or too windy, you can’t go up and work,” he said. “The other hard part is when you go out of town, and you meet so many people that you build a friendship with and then all of a sudden, you’re not dealing with that person anymore. You don’t know if you’ll ever see them again and that can be tough sometimes.”

While the job does come with challenges, Sapp says overall, it’s been a

great 20 years, and now he can pass on his knowledge to his son Adam, who has worked for Advanced Equipment for five years.

“The first two years he came out of town with me quite a bit to learn the trade, and the more he learned, the more they cut him loose and let him on his own primarily doing work in the Twin Cities putting up elevators,”

“It’s been fun working with my son, and he’s my replacement when I retire,” Sapp said with a laugh.

Both Sapp and Yamry encourage younger generations to start a career in the trade.

“This is a great union, everything from the job to the insurance and the pension,” Yamry said.

“I encourage younger kids to go into trade. It’s a good living and a good way of life,” Sapp said.