Local 49 was represented at the United States Capitol 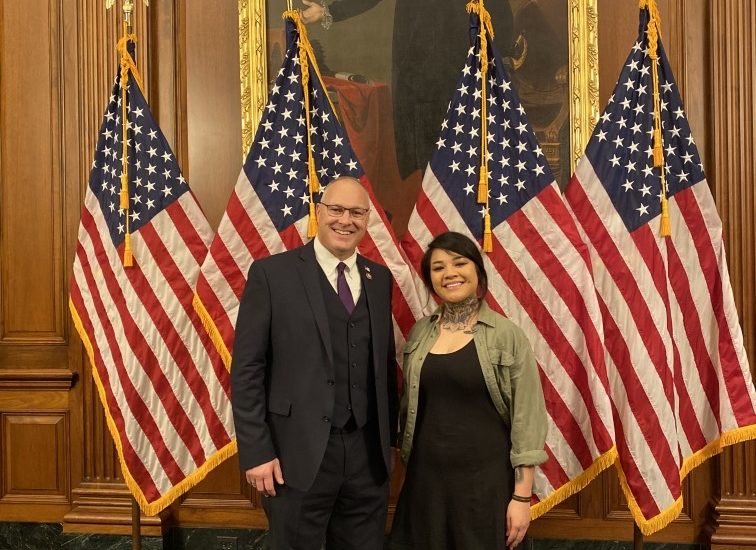 Local 49 was represented at the United States Capitol

Local 49 was represented at the United States Capitol in February as Local 49 Apprentice Mahaila Houle attended the State of the Union hosted on February 4. Mahaila was invited to participate in this prestigious event by Congressman Pete Stauber from the 8th District of Northern, MN, who wanted to bring a Local 49 member as his guest. Congressman Stauber highlighted the Enbridge Line 3 Replacement Project and talk about the opportunities that it will provide to young workers, such as Mahaila.

“I previously had no experience with operating heavy equipment, and it was very intimidating considering how green I was, but I was ready to learn and take in as much as I possibly could,” Houle said.

Soon after, she was accepted into the apprenticeship program and is currently working for Northland Constructors. Throughout Houle’s early career as an operator, she has already worked on notable projects such as the Superior Street and Essentia projects in Duluth as well as several road and bridge projects.

“At first, I thought I would want to go into the crane apprenticeship program, but as I took more classes, I gravitated toward excavators, backhoes, and rollers, so I think I’m going to stick with pipeline or highway heavy work,” she said.

As far as being selected to attend the State of the Union with Congressman Stauber, Houle said she was shocked, but excited that she is getting this opportunity.

“I asked my apprenticeship coordinator – Steve Tuhy – why I got selected, and he said that it was my attitude and work ethic. I appreciated hearing that because I do try and help out my fellow apprentices and others who are interested in the apprenticeship program,” Houle said.

Houle spent two days in Washington, D.C. as part of the event where she was able to meet and speak with representatives about the work that she does and how it’s important to provide young workers the opportunity to work on significant projects, such as Line 3. She was also able to sit and listen to the President’s State of the Union address in person.

“It was all so fascinating, once the state of the union started you couldn’t leave the room and we listened to the President speak,” she said. “I personally enjoyed the energy of the room and it was interesting because they didn’t show half of what I saw on television. It was an amazing experience.”

“I really enjoyed representing Local 49 and the Local 49 Training Center. I talked about what kind of workers we need and why it’s so important to have a skilled workforce. I met so many people, and I was just happy to be a part of history – this was a once in a lifetime opportunity,” she added.