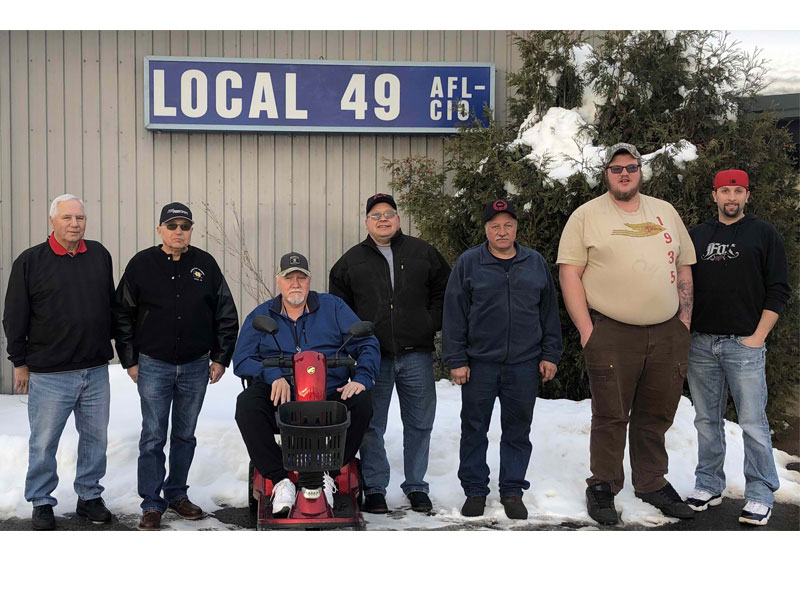 The Luukkonen family out of Virginia, MN can trace their union roots all the way back to the early 1940s. More than 20 family members have been members of Local 49.

John and Mike Luukkonen have each been members of Local 49 for more than 40 years and are the co-founders of the custom crushing and screening company Nothing’s Too Tough (NTT).

“When it comes to crushing, Nothing’s Too Tough, and that’s how it all began,” John said. John’s wife, Patrice, has a more fitting name for the company. “I always said No Time Today,” she said with a laugh.

The Luukkonens know that when you work for a crushing and screening company, you work seven days a week; you’re on call 24/7, and you work all year-round.

“Most of us were taught by our parents how to do this work; it’s always been ‘hey you’re not sitting at home today; you’re coming out to work,’” said Robert Luukkonen, a second generation crusher and 40-year member.

Their job in the mines is to screen pellets to take the fines out of them so that the mines can ship those materials to two different types of steel mills.

“The pellets made high quality steel some of which is used for automobiles, and the fines that we screen out of the pellets would go to make appliance items,” Robert explained.

Josh Luukkonen, Robert’s son, and a five-year member, explained that working year-round and always being on call is one of the toughest parts of the job.

“You could get a call at any moment by the mining companies. If they call at 2:00 a.m. saying they are broken down and need a conveyor to put materials in a plant, you have to go; otherwise they’ll just call someone else,” he said.

Josh explained that on the job site, you are also working in conjunction with the miners, so you have to build those

“You work side by side with them. Sometimes we have hoppers and conveyors set up into the plant, and the miners feed the hopper, and we would watch the belts and clean up,” Josh explained.

“Other jobs we’d be there screening or crushing, and the miners would be there to pick up what we’re screening and what’s coming off of our conveyors,” he added.

John and Mike started NTT in 1987 with four other partners and became sole owners in 1991.

“Well, you know you go to the bar; and you start talking, and we thought—hey we can do that,” Mike said with a laugh.

“When we first started, it was tough, but it got easier as we became more established, ” Mike added. “We always maintained a high level of work, and our guys always got paid on time.”

Since NTT’s inception, John and Mike made it a priority to keep it a union company.

“With the union, you have the most qualified people,” John said. “We would never hire anyone else because we have high standards. This is a legacy, and we intend to keep it that way.”

John also stated that having the benefits package with Local 49 was a contributing factor to NTT’s long-term success.

“The union offers security, good pay for workers, great benefits, and a great pension. You can’t beat it,” he said.

John and Mike recently sold NTT last year to a new owner, Aaran Leustek. They said that they would have never sold it if the new owner wouldn’t keep their employees and maintain the high standards that NTT has set for the last 30 years.

“We have a good reputation out there, and we wanted to make sure it was going into the hands of someone who would keep it that way,” John said.

While the type of work is tough, the Luukkonens take pride in their long family history in the business and in Local 49. They are even a staple in the northern Minnesota Local 49 summer picnic as the builders of the BBQ grill that is used to cook the food for the picnic.

John and Mike built the grill in 1991, and for more than 25 years, their employees are the ones who cook the food. NTT has also donated dozens of prizes for the event over the years.

Chris Luukkonen, who is the second oldest next to John, recently retired and worked 40 years as a 49er in the blacktop industry.

In addition to working on crushers, Ricky Luukkonen worked in the marine division of Local 49 for 20 years.

The Luukkonens will continue the family tradition of being in the crushing business and being proud long-standing members of Local 49.

“This is a legacy. My grandfather was a 49er. My dad is; all of my uncles and cousins are as well so it’s an honor to be a part of something this big and be able to contribute to it,” Josh said.