While Charlene Becker has only been a Local 49 member for less than a year, she already has made a name for herself in the lowboy driver industry by becoming the first female lowboy driver in Ziegler CAT’s 106-year history.

“It’s a pretty big crown to wear, but I think I wear it well,” Becker said.

Becker currently works at the Columbus/Hugo Ziegler location, but before her time there, she has been around the trucking industry her whole life.

“I always knew that this what I’ve wanted to do in life. I’ve been around the trucking industry, and I was always in a pit somewhere,” Becker said. “I started my first job in the industry at 27, where I ran a dump truck, and since then, I’ve done pretty much every job you can do in trucking.” 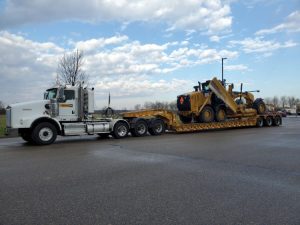 After five years of working in the trucking industry, she now operates Ziegler’s largest trailer.

Not only does Becker run the largest rig that Ziegler has, but she also is the only female lowboy driver in the state of Minnesota to call in her own permits.

“When I haul oversize loads, whether it be wide, heavy, or tall, I have to call into the state to get a permit and let them know the route I am going. If I am on a route (for example) where the road isn’t big enough or maybe there’s a bridge that’s too low, the state needs to re-route me,” Becker explained.

“There’s a small staff in the permit office, and they’ve told me that I am the only woman in the state of Minnesota that’s a lowboy driver to call in their own permits, and I’m pretty proud of that,” she added.

While Becker says that she loves her job, she noted that it’s a lot of responsibility, and there are more things that a lowboy driver needs to take into account compared to others in the trucking industry.

“First and foremost, I have to be extremely safety conscious. For example, sometimes I am sent down to residential areas where cars can barely fit in so I have to be aware of traffic all around me. I also have to make sure everything is secured and safe before I even get on the road,” she said.

Becker encourages more women to start a career in the industry and says, “don’t let anyone intimidate you.”

“I’ve been told many things to try and keep me away from doing what I want to do, but I held my head high, and I knew I wanted to make this a career for myself, so I did. I do what I want, and no one is going to stop me, and it shouldn’t stop you either. Do what you feel is right for yourself,” she said.