All in the Family: Mother, Father and Daughter all Local 49 Members

All in the Family: Mother, Father and Daughter all Local 49 Members

Being a Local 49 member has been a family business for Holly Brannen and her parents. Daughter Holly Brannen is a brand-new member of Local 49 who followed in both her parent’s footsteps. Holly’s father, Eric, has been a member for 17 years and her mother Janice has been a member for three years. The family is so close that Holly and her mother work for the same contractor – Allied Blacktop Co.
Holly says that both she and her mother got the idea of going into the construction industry from her father.
“Everything dad’s done, my mom has done and now so have I,” Holly said. “He always talked about the benefits of being a Local 49 member with the pension and health care, and I was interested in having that kind of security for myself.”

Eric Anderson has been in construction all his life, starting with his time in the Army.
“I started out operating equipment in the Army and then when I got out, I transitioned into owning my own concrete company for a while,” Eric said. Eric then ended up working for McCrossan Construction Company on the I-35W project, and now he currently works for S.M.Hentges & Sons Inc. as a boom truck operator.
Holly’s mother Janice Anderson previously was a truck driver and drove all over the country, during this time she also gained some experience operating a skid steer which is what led her to land a position with Allied.
“I always heard Eric talk about how well Local 49 treated him. He never had a bad thing to say about the union especially with the great health insurance and the pension,” Janice said. “Because of that I kept trying to find union work and I just happened upon Allied. They hired me on right away because of my experience with the skid steer.”
While she’s mainly operated small equipment, Janice plans on expanding her skills.
“I want to learn how to operate more equipment because the more versatile I am, the more helpful I can be to my company,” she added.

As far as working at the same company with her daughter, Janice says it’s been a fun experience. 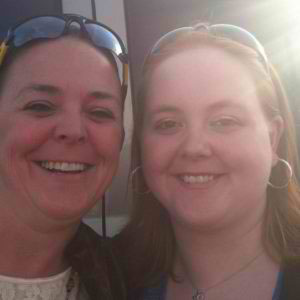 “My daughter is the spitting image of me, and she likes working with equipment. I think that is just so awesome and we work well together so it’s never been an issue,” Janice said.
Holly says she also enjoys working with her mother.
“My mom is the kind of person that makes everyone her kid anyways, and everyone on the crew refers to her as some kind of mother figure, so it’s reassuring working with her,” Holly said.
Holly currently operates small equipment for Allied, but her goal is to become a crane operator eventually. Holly plans on entering the crane apprenticeship program at the Local 49 Training Center.
“I’m just so excited, and I can’t wait to grow in this career. Right now, I’ve completed one small equipment course at the Training Center, but I eventually want to enter the crane apprenticeship program and become a crane operator,” Holly said. “I like the idea of being able to travel all over the country.”

Both Eric and Janice say that they are incredibly proud of their daughter and her career path.
“Holly has a lot of potentials, and she has a chance of making a decent living and creating a bright future for herself. I’m happy she has that chance,” Eric said.
“I support whatever makes her happy and I know that she’s happy being a Local 49 member with her pension and great health care…Local 49 is awesome,” Janice said.