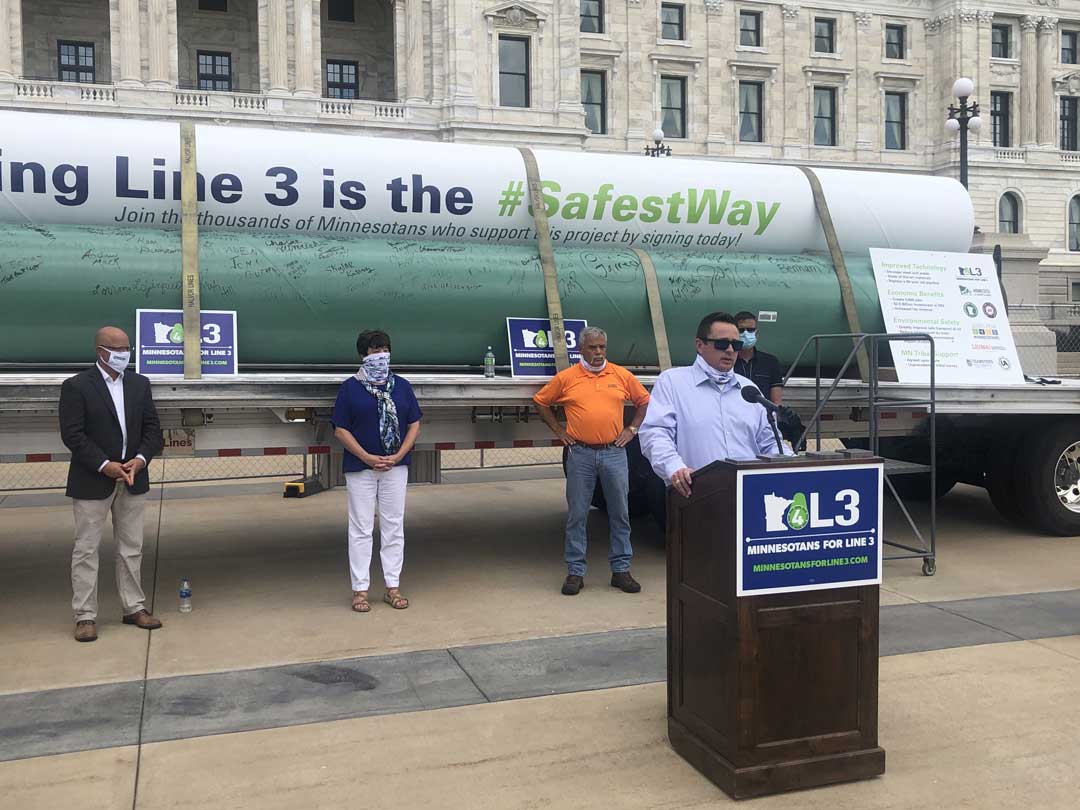 Local 49 joined other supporters of the Line 3 Replacement Project today at a media event held at the Minnesota State Capitol to officially deliver the signatures to Governor Walz of more than 11,000 Minnesotans who have virtually signed a section of the pipeline and are calling on him to say no to any more delays in the permitting process.

“We have a more than 60 plus-year-old pipeline that is aging in northern Minnesota, and we have the opportunity to replace that with a brand new state-of-the-art pipeline that will last decades longer and will be much safer. We have a company that wants to invest 2.5 billion dollars of their own money into a construction project in an area with a 20 percent unemployment rate. The signatures you see here today and the thousands more that have already signed from all over the state support this project. They see how many jobs will be created, and they see the need to replace an aging pipeline with a brand new one.

The people have spoken. They support this project and, more importantly, the people who live where the project will be put in overwhelmingly support this project. Every local mayor, city council, and county have all signed resolutions supporting this project. Replacing Line 3 has been studied extensively for years with more than 70 hearings, and the Public Utilities Commission in Minnesota have approved this project twice. The time for process is over. The time for jobs is now. And the time for a safe pipeline is today. We call on Governor Walz and Lieutenant Governor Flanagan to allow their agencies to let this project happen and let the Public Utilities Commission’s decision stand. Get out of the way, and let’s get to work.”

August 19th is the deadline for groups to file an appeal with the Minnesota Court of Appeals of the Minnesota Public Utilities Commission’s recent action to re-issue a certificate of need for the project. The Walz Administration has to decide whether the Minnesota Department of Commerce will repeat an action that started under the Dayton Administration and file another legal challenge to the PUC decisions.  If any additional legal challenges are filed by the Walz Administration, it could not only create additional and unnecessary delays to the start of construction, at a time when Minnesota needs the jobs and economic boost that a $2.6 billion private creates.

The Line 3 project has been under review by agencies and regulators for more than six years. Pending receipt of remaining permits, Enbridge has indicated they are poised and ready to begin construction later this year. The Line 3 Replacement Project is an approximately $2.6 billion private investment that will immediately create more than 4,000 good-paying